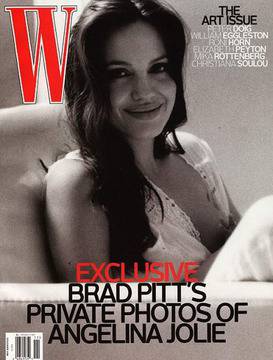 Everyone’s talking about that. Everywhere I turn my head it’s either Angie’s breastfeeding photos by Brad Pitt for W magazine or the US financial clash. At least I’ve got the choice! (Pictures from the magazine updated at the end of the article!)

I won’t get financial, we’re Stylefrizz. We love fashion and entertainment. So I’d go for Angelina Jolie and her fifth and sixth children, the twins Knox and Vivienne, her natural children with partner Brad Pitt. It’s not in discrimination that I’m saying the above, it’s because few years ago, W magazine published photos of her, Brad Pitt and five children in a story about domestic bliss in 1963. Prophecy or just marketing? (more pictures after the jump)

W is betting again on the most powerful couple of the world (at least as far as entertainment goes) and for its November 2008 issue make public a set of thirty something “private” photos of the Brangelina household. Photos said to be taken by Brad Pitt (in August 2008, in...
Прочети цялата публикация

The couple was accompanied by all of their kids — Maddox, 7, Pax, 5, Zahara, 4, Shiloh, 2, and 6-month-old twins Knox Leon and Vivienne Marcheline. (Brad and Knox wore...

To view this video please enable JavaScript, and consider upgrading to a web browser that supports HTML5 video Angelina Jolie and kids 'quizzed by FBI' over incident between Brad Pitt and Maddox

Angelina Jolie gets in some mother-daughter bonding time with her girls — Zahara, 4, and Shiloh, 2 1/2 — while out and about in New York City on Wednesday (February 18). The trio was seen walking into their favorite store, Lee’s Art Shop, to pick up some arts & crafts supplies. The Jolie-Pitt...

On the red carpet, E!’s Giuliana Rancic tried to get into a “deep” question and asked the couple on what they’ve learned from each other. Brad responded, “Let’s go to the next...