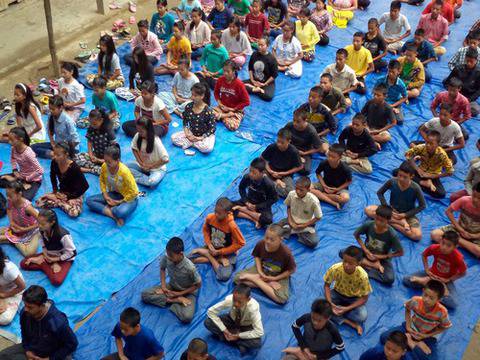 (Minghui.org) A practitioner living in Sarnath, who has introduced Falun Dafa, also known as Falun Gong, in Sikkim, Ladakh, and other remote places in India, recently ventured into some of the most remote and inaccessible areas in Northeast India.

Northeastern India consists of seven states, often called the “seven sisters.” Their cultures are more similar to those found in Tibet, Myanmar, and China than in mainstream India. Permits and safety worries deter most travelers, yet the people here are among the friendliest in the whole subcontinent.

Mizoram is a tiny, mountainous, sparsely populated state, and the most inaccessible of the seven states. It is the land of the highlanders, literally called Mizos of the Mongoloid race. They are very hospitable to visitors and peace-loving.

Bulgaria Loven Park - one of the most beautiful places in the world. a.C.м

Couple Weddings India: The Most Blessed Day Of Their Life

Couple Weddings India: The Most Blessed Day Of Their Life by Alison Smith SEO

The wedding is indeed the most desired days of anyone’s life. It not only accompanies a lot of stimulation and enjoyment, but also a series of rituals and traditions to follow....

Globallshare | Make the Most of World

(1) Statement of Rights and Responsibilities

This Statement of Rights and Responsibilities  derives from the...

Faith No More in day one of Spirit of Bourgas

Faith No More in day one of Spirit of Bourgas

Faith No More will open the 2009 Spirit of Bourgas music summer festival on the Black Sea with a performance on August 14 starting at 11.10pm on the...

Welcome to the World of Jockey India

Practitioners of the spiritual discipline Falun Gong marched through the streets of London and Cambridge on Saturday 22 and Sunday 23 July, appealing for an end to the 18-years of persecution instigated by the Chinese communist regime.

A colourful marching band was followed by...