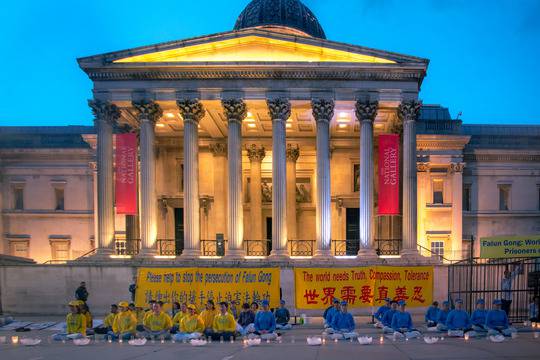 Practitioners of the spiritual discipline Falun Gong marched through the streets of London and Cambridge on Saturday 22 and Sunday 23 July, appealing for an end to the 18-years of persecution instigated by the Chinese communist regime.

A colourful marching band was followed by protesters peacefully holding banners and placards. On the Sunday evening, a candlelit vigil was held in London’s Trafalgar Square.

Falun Gong is a traditional Chinese meditation practice that cultivates truthfulness, compassion, and tolerance. A brutal crackdown of the practice was initiated on 20 July 1999 by the then-leader of the Chinese communist party, Jiang Zemin.

Since that time there have been 4,112 documented deaths, but this is thought to be the tip of the iceberg. The NGO Freedom House estimates that the number of practitioners detained in labour camps and sentenced to prison terms is in the hundreds of thousands, “making them the largest contingent of prisoners of...
Прочети цялата публикация

(Minghui.org) Ms. Zhang Yuhua was among the 27 survivors of religious persecution from 17 countries, who met with President Donald Trump in the Oval Office in the White House on July 17, 2019.

The 27 survivors were in town to attend the second Ministerial to Advance Religious Freedom...

(Minghui.org) A practitioner living in Sarnath, who has introduced Falun Dafa, also known as Falun Gong, in Sikkim, Ladakh, and other remote places in India, recently ventured into some of the most remote and inaccessible areas in Northeast India.

In the U.S. – Rallies for the legalization of marijuana (31 Pics)

The Services of Unidecor Ltd - Building solutions in London

FORTY YEARS OF TRADING – PAST AND PRESENT

The London Stock Exchange is among the world’s oldest stock exchanges and can trace its history back more than 300 years, but it is in the last 40 years that we have seen how technology has influenced how we trade. In the last four decades we have been privy to the most dramatic progress in...

The Devolution of Britney Spears: From Pop Star to Celebrity Trash in Less than 7 Years

The Devolution of Britney Spears: From Pop Star to Celebrity Trash in Less than 7 Years

From innocent good girl to psycho-mom, we document the devolution of Britney Spears from pop icon, to celebrity trash and everything in between.

Temple of Baal to Be Erected in NYC, London, and Hundreds of Other Cities

To view this video please enable JavaScript, and consider upgrading to a web browser that supports HTML5 video Temple of Baal to Be Erected in NYC, London, and Hundreds of Other Cities

This is happening next month. This is really...

Attems Pinot Grigio Ramato continues a tradition of the Republic of Venice, since “ramato,” or coppery, was the term that referred to Pinot Grigio in contracts. A special vinification practice led to the use of this term: the must remains in contact with the skins for 24 hours and this...