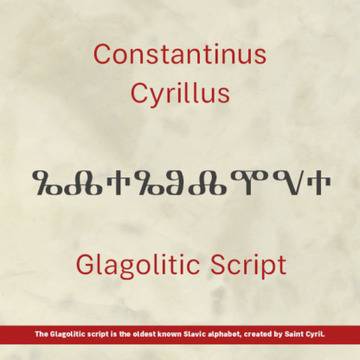 The Glagolitic script is the oldest known Slavic alphabet. It is generally agreed to have been created in the 9th century by Saint Cyril, a Byzantine monk from Thessaloniki. He and his brother, Saint Methodius, were sent by the Byzantine Emperor Michael III in 863 to Great Moravia to spread Christianity among the West Slavs in the area. The brothers decided to translate liturgical books into the then current Slavic language understandable to the general population (now known as Old Slavic language). As the words of that language could not be easily written by using either the Greek or Latin alphabets, Cyril decided to invent a new script, Glagolitic, which he based on the local dialect of the Slavic tribes from the Byzantine theme of Thessalonica.

After the deaths of Cyril and Methodius, the Glagolitic alphabet ceased to be used in Moravia, but their students continued to propagate it in the First Bulgarian Empire, where it was subsequently also...
Прочети цялата публикация