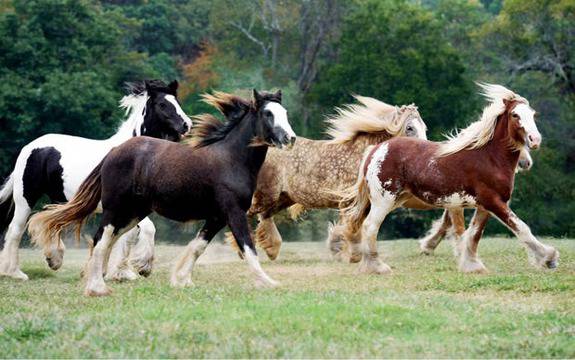 RSPCA inspectors were on the scene at Bridgend, South Wales, after calls from worried animal lovers.

"We have found at least five or six dead and they are dying of starvation and lung infections.

"The situation is out of control."

Residents in the town say they have been woken up by small groups of horses galloping past their homes in the middle of the night.

Animal lover Pat Jones said: "They have apparently been wandering around for the last few days.

"One of my friends has spent the morning trying to keep them from running into the road.

"There are around 250, but they have split up into groups and they are absolutely starving.

"I've heard that at least five or six have been found dead. It's really sad."

An RSPCA spokesman said: "We are assessing the situation."

The Horses by 54ka – Book Trailer

To view this video please enable JavaScript, and consider upgrading to a web browser that supports HTML5 video Video ENTIRE BRAZILIAN TOWN OF 620 FEARED DESTROYED BY FLOODING AFTER DAM BREAK

InfluenceStyle is a modern shopping destination that offers premium denim, contemporary designers and accessories with a unique selection of the latest trends.

One of the world's most unlikely tourist attractions has been closed down. The nuclear exclusion zone around Chernobyl had previously attracted around 10,000 visitors per year, with each paying about £65 to tour operators. With flights and hotel bookings on top of this, tourism in...

The father of Acodetta - Acodetto is the most impressive stallion used for father in our sport club. His pedigree is an aggregate of great and proven stallions. The Acodetta's mother is one of the most beautiful and flawless exterior mares of the club. Acodetta is so indescribable splendor, so if...