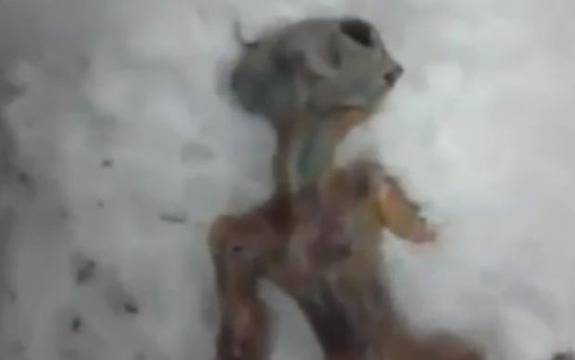 The video, which many viewers have dismissed as an elaborate hoax, was allegedly filmed near the town of Irkutsk close to Russia’s Lake Baikal in recent weeks.

In it, a local is shown leading a camera man to a snowy spot on the edge of a forest where he points out the remains of “the alien,” a tiny being which has had one of its legs ripped off. The creature looks like an extra from Hollywood central casting with an enlarged cranium, hollow eyes, and a small reddish body.

One of the men in the video is heard giving an expletive-laden commentary in Russian, adding that a dog originally sniffed “the alien” out.

The video has sparked conspiracy theories of an alien crash landing in the area. Alleged UFO sightings in the vicinity are not uncommon, and some viewers speculated that the Russian military had not cleaned up the area after a UFO crash properly overlooking the tiny corpse.

The video was released after villagers in the area reported...
Прочети цялата публикация

15-year-old Karen Perez was last seen by her family on...

Ghost Coming Out Of Dead...

Most people tend to loathe their belly fat, and they’ll expend serious effort to see it disappear. But most people also don’t know that their belly fat contains adult stem cells capable of healing almost anything. They can regrow tissue, form a new breast for post-cancer reconstruction or...

The man, found dead in a Plovdiv hotel last week, died after a solid "cocaine" cocktail.

The man, found dead in a Plovdiv hotel last week, died after a solid "cocaine" cocktail.

In the unfortunate night, the 33-year-old Plovdiv citizen has drunk a lot of alcohol, has called prostitutes and used drugs, writes TrafficNews.bg. He rented a room in a hotel next to the Central...

To view this video please enable JavaScript, and consider upgrading to a web browser that supports HTML5 video Recep Tayyip Erdogan Crying Funeral Friends of the Dead in the coup attempt occurred

Choose from our range of manicures/pedicures complete with file, scrub, massage and an array of great shades to paint the nails.

There are various different types of pedicures & manicures. Some of the most common types are as follows: