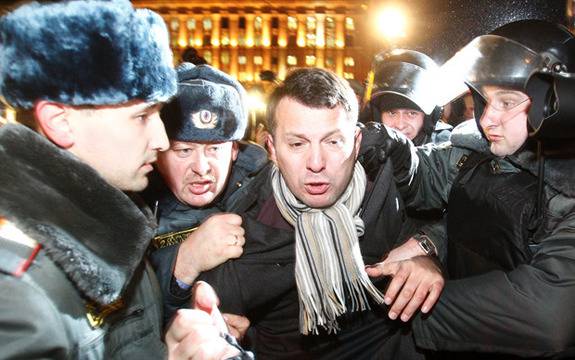 It was perhaps the biggest opposition rally in years and ended with police detaining about 300 activists. A group of several hundred marched toward the Central Elections Commission near the Kremlin, but were stopped by riot police and taken away in buses.

Estimates of the number of protesters ranged from 5,000 to 10,000. They chanted "Russia without Putin" and accused his United Russia party of stealing votes.

United Russia won about 50 percent of Sunday's vote, a result that opposition politicians and election monitors said was inflated because of ballot-box stuffing and other vote fraud. It was a significant drop from the last election, when the party took 64 percent.

The result has energised the opposition and poses a humbling challenge to Prime Minister Vladimir Putin in his drive to return to the presidency.

Anti-America songs were chanted, flags burned and tears flowed as Islamic fundamentalists united in their anger over the killing.

In Pakistan, over 1,500 people took to the streets with posters of the al-Qaeda leader, chanting "long live martyr Osama bin Laden".

Gallico, 46, was arrested on Dec 23 in collaboration with Italian authorities, according to a statement from Barcelona police.

Following his arrest, police claimed Gallico was part of the Calabrian Ndrangheta, one of the most powerful criminal organisations in Italy.

US election system criticised over finance rules and voting restrictions

US campaign finance rules, which have allowed wealthy individuals to pour millions of dollars into the 2012 presidential election, have shaken public confidence in the political process, according to a report by the Global Commission on Elections, Democracy and Security.