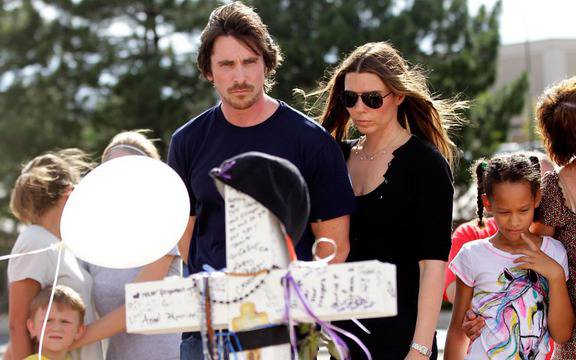 British actor Christian Bale broke off a Batman promotional tour in Europe to make a surprise visit to the injured victims of Friday's shooting in Aurora, Colorado.

Accompanied by his wife Sibi Blazic, the star of The Dark Knight Rises laid flowers at a makeshift memorial close to the cinema where the massacre occurred. He walked past the 12 crosses erected for each of the slain victims, with many people there not realising who he was.

At the Aurora Medical Centre, Bale spent two-and-a-half hours chatting to the injured as well as medical staff treating them.

Los Angeles law enforcement has confirmed that there are at least 2 victims from...

As the actor approached the village, he was stopped by four men in plain clothes.

"I am here to see Chen Guangcheng," Mr Bale told them, according to CNN, which accompanied him and filmed the encounter. "Go away!" the men shouted back. Dozens more men then emerged and a scuffle...

CONAN Highlight: The former Batman will play the Apple founder, and...